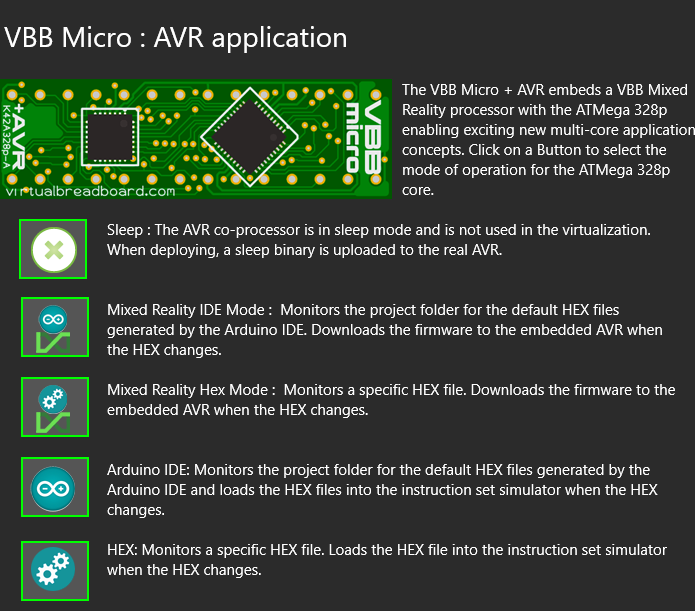 The AVR is put into Sleep mode and doesn’t participate in the runtime.

The Project directory is monitored for the <projectName>.ino.standard.hex hex file that is exported using the Export compiled Binary from the Arduino IDE. The hex file is loaded into the virtual Arduino when a project is launched and also when changes to the hex file are made during virtualization. 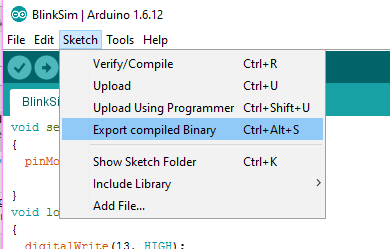 The hex file that is loaded for simulation is the same hex file that can be programmed into a standard Arduino UNO, or an Arduino UNO upgraded with the VBBMicro-47K42A328P. Programming is done directly from the Arduino IDE over the USB Serial connection.

When starting in Arduino IDE Monitor mode the Arduino IDE will launch a new session with this BlinkSim.ino file loaded and will start monitoring the project directory for new HEX files.

HEX Monitor mode allows you to pick a specific HEX file from the file system to monitor. This allows tools other than the Arduino IDE to be used with VBB. Because of Windows Store Applications security you need to first pick the folder the HEX file you want to monitor is in. This gives the VBB App permission to work with the HEX file. Hence, when you select HEX Monitor mode a picker dialog will popup allowing you locate the HEX file.

The project folder is monitored for the standard Arduino IDE output HEX file as per Arduino IDE Monitor Mode. When the HEX file changes the virtualization is restarted and the HEX file is downloaded the real ATMega328p device over the serial Connection.

The HEX file as per HEX Monitor Mode. When the HEX file changes the virtualization is restarted and the HEX file is downloaded the real ATMega328p device over the serial Connection.